Spring has arrived and painting my coracle is on my list of things to do! Here is the account of how I made it.

This special blog post was produced for World Rivers Day, 30 September 2012. It was first published on The Welsh View the decommissioned blog of the Countryside Council for Wales.  The text is republished here with permission from Natural Resources Wales.

I arrived in at the Green Wood Centre in Ironbridge feeling quite apprehensive. My experience of large construction projects is confined mainly to using brightly coloured plastic bricks from Denmark. Somehow I was now facing a three day coracle building course equipped with a bag of borrowed tools.Giraldus Cambrensis [Gerald of Wales] provided one of the first descriptions of a coracle as as near round boat made of willow and covered with raw hides – perfect for fishing and crossing streams. I knew they were used on rivers in Ireland, England and Wales so I guess some subliminal part of my Celtic heritage had played tricks on me when I signed up for the course, part of my summer holiday plans.

Day one – symmetry, slats and spats

Day one focused on making the wooden frame. This was a task  traditionally undertaken by men. Our merry group of coracle makers consisted of two couples, five single men, two young teenage girls [working together] and me.  Nine coracles were to be produced over the next few days. We were drawn from far and wide – Anglesey, New Zealand, London, Cambridge, the Isle of Wight.

Kevin, our teacher, started by presenting us with three blocks of wood and a plank, the makings of the seat – immediately demonstrating to us how to screw the fundamentals together. 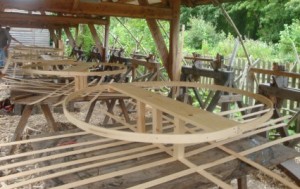 This simple structure would be the anchoring point for an architecture of thin and very flexible ash slats. Next, we fixed the main ribs, which were used to build up an overlapping lattice of slats. We then attached the near circular rim.

It was a tricky job to coax and massage the slats into a symmetric series of curves and then to nail them to the rim. The objective was to make sure there were no gaps between the overlapping slats. There were certainly a few exclamations as slats snapped while being bent into place.

At the end of the day the elegant wooden coracle skeletons rested on our work tables like giant baskets. Amazingly I had escaped without any blackened finger nails from hammer blows. 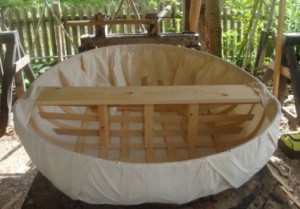 Fitting the fabric to the frame.

Day two was mainly women’s work but nevertheless proved tougher going for me – though it began with finishing the wood work.

I installed three slats under the seat which would confine thrashing fish to the back of the coracle and not have them under the occupant’s feet.

There are accounts of large salmon pulling both boat and experienced fishermen under water!

At this point in coracle construction, women would have taken on the responsibility to fit the cover and to carry out the water proofing process using pitch.

It must have been a tough and unpleasant task dealing with raw hides – but over time these were replaced by flannel, calico or canvas. I draped a single large piece of calico up and over the outside of the basket shape – working to form three pleats on either side of the front of the vessel and four pleats across the back.

To make the shape more hydrodynamic the pleats are reversed to go with the flow of water around the boat. The fabric was pulled taut over the edge of the rim and fixed in place using a staple gun. 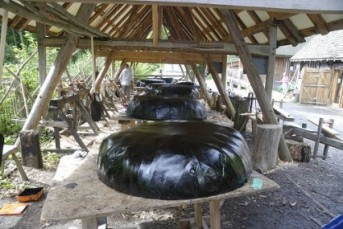 Coracles transformed into shiny black turtles by a coat of bitumen.

After being on our feet for the first day it was good to have the excuse to sit down. We rested the edge of our coracles on our knees and started stitching up the pleats.

I was foolish to decline the first offer of assistance with the sewing but eventually relented as my fingers grew sore and tired from forcing the curved upholstery needle through the layers of fabric.

Red spots of blood appeared on some of the white calico covers.

The day ended with the application of the first coat of bitumen. We left our coracles looking like a row of giant turtles with shiny black shells.

The pressure was off on day three as we just needed to add some more coats of bitumen, learn how to attach the final trim around the rim and make the paddle.

The highlight, of course, was getting on the water.

A coracle is a very agile and maneuverable craft and it draws only a couple of inches of water making them ideal for shallow, rocky and boulder strewn Welsh rivers.

We had a gentle introduction to using a coracle on a nearby pond. I jumped at the chance to try out a Cleddau coracle, which has a relatively straight front edge. It is also a heavier structure than anIronbridge coracle.

The trickiest part is getting in backwards, and finding a footing with gives you the balance to allow you to sit back and down on the seat behind you. After that it was more stable than I anticipated and felt like being in a small rowing boat.

I completely failed to master the figure of eight paddle movement used to propel my craft, but happily punted around with one paddle for some time.

Now it was time to go, and I strapped my coracle to the car roof rack. Stuck in a traffic jam outside Shrewsbury and driving through the glorious rolling Shropshire landscape, I wonder how many other drivers noticed that our roof box shape was actually a much treasured coracle on its way home. I made it!

Building a coracle was a rewarding social and creative experience. We helped each other, shared our knowledge of woodwork and thoroughly enjoyed working with a natural material.

We left with an appreciation of the history of coracles and their part in our Celtic heritage. Coracles are a connection between people and their environment.

And for my next challenge? Perhaps some kind readers would be willing to teach me how to fly fish?