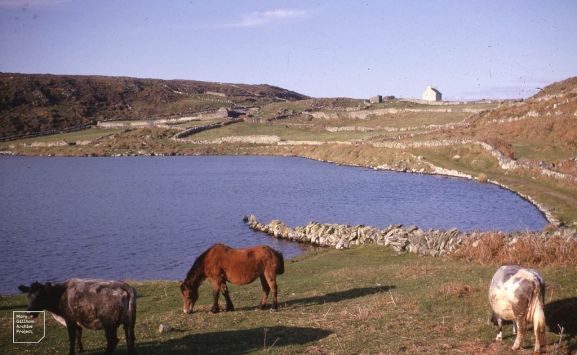 Welsh naturalist Dr. Mary Gillham of Cardiff University had a special relationship with Ireland and some of the accounts of her visits have lovely turns of phrase – both eloquent and humorous.

In 1963 Mary travelled to Cape Clear off Co. Cork, enroute  “Curlews bubbled, a bittern boomed and flocks of finches and larks came rollicking past.”

“”Lost in a maze of villages where signposts were in short supply, I accosted an elderly couple. “Where am I?”
They looked at me in bewilderment, pointing at the patch of Mother Earth on which they stood. “Why, you’re here of course.””

On landing on the island – “A narrow lane led off up the valley, lined with mounded banks of golden gorse, beckoning the newcomer into the interior.”

Following several sunny days – “we were immersed in a clammy cloud of mirky mist, dark as bilge water…..The mist settled, steamy and breathless, where little waves lapped on the stones, but the stillness onshore was absolute.” 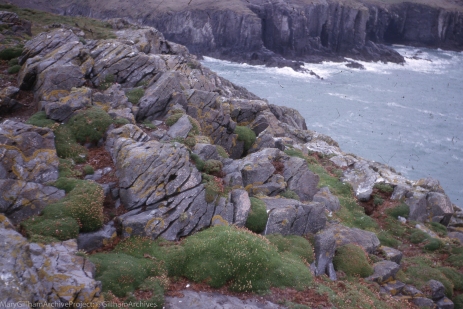 Mary loved plants – “The massed twin heads of kidney vetch on rocky ridges overshadowed drifts of white scurvy grass flowers in the gullies below. Primroses and violets snuggled in sheltered depressions, some among stunted sloe bushes not much taller. Ubiquitous springtime celandines glistened through globules of condensed fog and Oxalis wood sorrel, template for the Irish shamrock, had strayed from woodland to raise shy blooms among tuffets of hardier thrift. Little mauve ‘snapdragons’ of ivy-leaved scrambled up the flanks of narrow headlands…..”

Mary Gillham made specific trips to Cape Clear, The Skelligs, Garinish Island, The Aran Islands, Inishbofin and Achill Island.  The photographic records of these visits are available on flickr thorough the Mary Gillham Archive Project.

You can enjoy more of her descriptions of her trips to Ireland in:  Gillham, M. (2007).  This Island Life. Discovering Britain’s Offshore Gems. Halsgrove.